On Saturday 11th April 2015 eighteen of us attended a day on Deserted Settlements hosted by Ian Groves at Ditchingham Village Hall. After a few “technical difficulties” the day got under way and Ian gave a fascinating presentation of deserted settlements and how to spot them. Interestingly not all desertions were caused by plague. Famine, war, agriculture and landlords all had their part to play. Ian also showed us a short film illustrating what a wonderful tool drones are for the landscape archaeologist on a site he has been working on in darkest Norfolk. Desertion is still happening. In the recent past for example villages have been “drowned” by reservoirs, or lost through military need such as Tyneham in Dorset.

In the afternoon the sun finally came out and we shared cars and went out exploring; firstly to Hales Green, a deserted settlement and looked about and at the former clay pits. 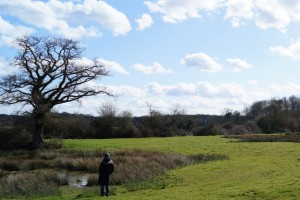 We then on to St Margaret’s, Hales, a Norman church – a gem of a building that apart from the later insertion of Gothic windows in the blind arcade at the apse is much as it was when built. 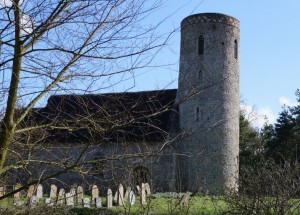 We then noticed the graffiti and Gordon was quick to find a pencil and show us that the sun dial was almost spot on! 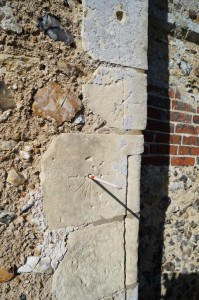 We also saw the up cycling of Roman materials – the red tiles as illustrated by Ian in this picture. 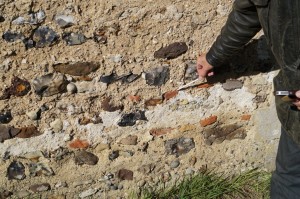 Having enjoyed this we all ventured to the next Norman church at Heckingham, another beautiful building, and according to Pevsner, built by the same person as Hales. 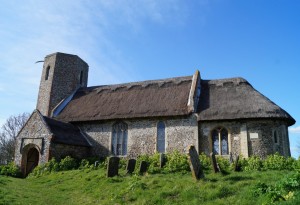 We would like to extend a huge thanks to Ian Groves for a truly excellent and interesting day. There is more information on his Facebook page

Big thanks also to Shauna Vaughton for her pictures (and some of the text!)