For our online meeting on February 19th at 2.00 pm Dr Hannah Cutler of Suffolk County Council Archaeological Service will be taking us on a journey through the rich archaeological record of the county town of Suffolk and the story of the investigation of that record.

Ipswich lies at the highest tidal point of the Rivers Orwell and Gipping, and has its origins as one of England’s four 7th–9th century AD ‘emporia’ or ‘wic’ trading sites. It was also a major Anglo-Saxon pottery production centre. More or less uniquely, the town lies directly on the site of its Middle Saxon predecessor. Waterlogged remains along the waterfront relate to successive phases of reclamation of the River Orwell, and the town has a distinctive 8th-century street pattern, a fossilised 10th-century defensive circuit, and the material heritage of a thriving Middle- and Late Anglo-Saxon, medieval and later estuarine port. As a result, Ipswich’s archaeological record is rich and internationally recognised. The borough also includes significant Palaeolithic and Later Prehistoric, Roman and earlier Anglo-Saxon remains relating to the contexts in which Ipswich developed, as well as the medieval suburbs and later development of the docks in the post medieval period.

To book your free tickets please go to our Eventbrite page.

We look forward to seeing if only virtually on February 19th. 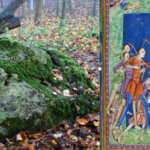